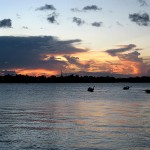 Achipur is a Chinese colony and the place derived its name from the Chinese businessman, Tong Achi who established a sugar mill on the banks of Hooghly River, south of Budge Budge, during the time of Warren Hastings. A sugarcane plantation was owned by him nearby that provided raw material to his mill. With the obliteration of the sugar plantation and mill, the place was deserted by the Chinese community. BOOK YOUR TRIP TO ACHIPUR

Places to see at Achipur: The main attraction of the place is the Chinese temple that was built long ago, when the area was populated by Chinese people. At the complex’s main entrance, a huge gate has been built recently. The temple is situated at a corner of the complex and surrounded by a low wall and you might have to crouch to get inside the temple, owing to the small entrance. The structure of the temple is that of a typical Chinese temple and comprises lovely wood carvings. In this temple, Chinese deities, Khudi and Khuda are worshiped.

The other important landmark is the grave of Tong Achi that overlooks the Hooghly. The grave is semi-circular in shape and is red in color. It comprises of stands between two kilns with Chinese inscriptions on them. The grave can be reached from the temple by means of a shortcut, via two brick kilns.

Nearby attractions of Achipur: You can spend some time at the Budge Budge Ferry Ghat watching the ships crossing the Ganges. The Ferry Ghat of Budge Budge is also historically significant because Swami Vivekananda landed here when he returned from his Chicago visit.

Things to do in Achipur: The place is considered a gateway for those interested in the history of Chinese community. You can even opt for picnics in this place, enjoying the sight of the Hooghly.

How to reach Achipur: Achipur is situated at a distance of 33 kilometers from Kolkata and can be easily reached by bus. The buses of route No. 77 depart from Esplanade and the journey takes around 2 hours. You need to get down at the bus stop called Boro Battala and from there, walk 15 minutes to Chinamantala, which had the ancient temple.

Dining facilities at Achipur: A few eateries are situated in and around the place.

BOOK YOUR TRIP TO ACHIPUR