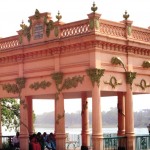 Chandannagar – located in the Hooghly district of West Bengal is famous for its French connection, its historical buildings, Jagatdhatri Pujo, the Ghats on River Ganges (locally called River Hooghly) and the famous Jalbhara sweets. Chandannagar was established as a French colony in 1673 and still today it holds a French flavour in the architecture of its famous Sacred Heart Church and collection of French antiques in the local museum. This small town bustling with its own culture and heritage is a great destination for a weekend trip just 44 kms from Kolkata.. BOOKING DETAILS OF CHANDANNAGAR

Places to see in Chandannagar: Chandannagar is dotted with numerous tourist attractions, which include famous churches, temples, museums and picnic spots. The lush landscaped Chandannagar Strand on the bank of River Ganges is a hotspot for the locals and the visitors alike. It is admired with nicely paved pathway and bright lights.

A number of buildings of  historical significance are located here too. The prime attraction of the Chandannagar Strand is the Vivekananda Mandir, which is a meditation centre. 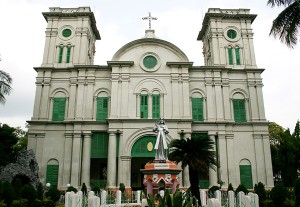 The Chandannagar Museum and Institute is worth visiting too. This French Museum or Residency was the former home of the French administrator J.F. Dupleix, which has now been converted into a museum. It showcases a wonderful collection of French antiques including 18th century wooden furniture, a cannon used in Anglo-French war and other items. The exquisite architecture of the Sacred Heart Church and the Chandannagar Church is also popular with the tourists. The site featuring the ruins of the St. Louis Church is also interesting. The underground House, popularly known as the Patal Bari, the lowest floor of which is immersed in the River Ganges is another superb architectural evidence of the early days.

Chandannagar has a number of temples, the most noteworthy being the age-old Nandadulal Temple, constructed in 1740. You can also locate some other temples of Kali and Shiva located everywhere. Visitors can also make a trip to the Nritya Gopal Smriti Mandir, which has a library and a theatre hall. The western side of Chandannagar is admired with three amusement parks namely Chuti, KMDA and New Digha. 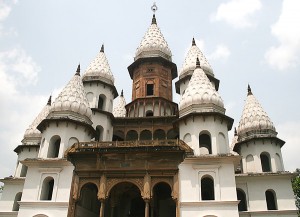 Nearby attractions around Chandannagar: You can make a trip to the temple of Hanseshwari housing the deity of Goddess Kali, on the bank of the Ganges at Bansberia, located 25 km. from Chandannagar. The temple with a towering height of 90 feet and featuring 13 peaks was built with limestone brought from Chunar, near Allahabad.  Each peak of the temple represents  a blooming lotus bud. There is also a Ananta Basudeba temple and a Swanbhaba Kali temple built by Raja Nrisinhadeb Roy Mahasay in 1788 located nearby. 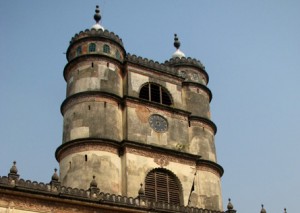 The clock of Bandel Imambara is another sightseeing interest for the tourists. This 100 years old antique clock made of solid brass features letters in Arabic and measures around 3 ton. The Bandel Imambara truly offers visual pleasure with its magnificent structure. The interior of the mosque is decked with several chandeliers, Iranian carpets and the teachings of Koran are inscribed on the wall. The Portugese Church in Bandel built in 1599 is also a must visit for tourists. 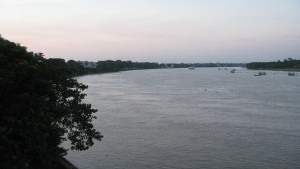 Best time to visit Chandannagar: Though the climate of Chandannagar is similar to Kolkata, winter with pleasant climatic condition is the ideal time for visiting the place. Chandannagar is also famous for the five-day long Jagadhatri Puja which is held with tremendous fervor and pomp during November every year. You can visit Chandanagar during this time of the year too. 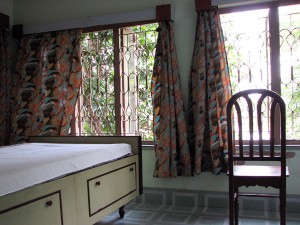 Lodging and dining facilities in Chandannagar: Our guesthouse apartment on the bank of River Ganges is a very homely accommodation in Chandannagar. A two-storey building overlooking the river with a Ghat and a shady portico on the river makes it an ideal riverside hideout with friends and family members. There are two well-furnished river-facing bedrooms (Non AC) in the guesthouse with western bathrooms, a terrace overlooking the river, a small garden, a dining area, a pantry, refrigerator and all other modern facilities. A caretaker is available to cater all your needs. Food can be cooked in-house or ordered.