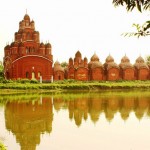 It can be said undeniably that a travel to the small and quaint village of Sukharia will offer you a unique experience. Located at a distance of 80 km from Kolkata, Sukharia, situated in the Hooghly district can better be termed as the abode of terracotta temples attracting history lovers to three medieval shrines of the 18th century. BOOK YOUR TRIP TO SUKHARIA

Places to see in Sukharia: Sukharia is admired with three major gracefully designed temples, which are the prime spots of tourist interest. The most notable temple was built by the village zamindar Bireswar Mustafi, in the year 1813 in the eastern part of the village. The temple, famously known as the Ananda Bhairabi Temple, houses the deity of Anandamoyee Kali. The shrine admired with 25 pinnacles, is a masterpiece of temple architecture and there are only five such temples in West Bengal. The temple walls are adorned with intricate terracotta design, offering a visual pleasure to the tourists. The premise of the temple houses 12 small temples, which have been built in two parallel rows, featuring 6 temples in each row. 10 of the temples are aat chala (eight sloped roof), featuring the Shiva Linga. The other two temples are Pancharatna (five Pinacled), among which one is dedicated to Shiva and the other houses the idol of Ganesh.

You can also visit the temple of Harasundari, built by another renowned zamindar, Kashigoti Mitra in the western zone of the village of Suhkaria. You will also locate another temple of Nistarani Kali, built in close proximity to the Harasundari temple. Though the temples were built long ago, still the carvings and the decorations of the temples are truly admirable.

Nearby attractions around Sukharia: Nabadwip is nearby.

Things to do in Sukharia: You can explore the village of Sukhuria and visit the temples admiring the site. State Highway 6 from Nabadwip would take you to Katwa.

How to reach Sukharia: Sukharia is well connected with Kolkata by railway. The nearest railhead is Somra Bazar. You have to board a train heading Katwa from Howrah and get down at Somra Bazar station (after Guptipara). You can take a Rickshaw to reach the temples from the station.

BOOK YOUR TRIP TO SUKHARIA