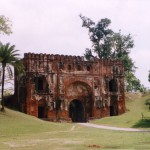 If you are historically inclined, then the city of Gour, drenched with history, is your ideal holiday destination. Nestled near the west bank of River Ganges, this historical city is situated around 40 km. downstream from Rajmahal, in the district of Malda of West Bengal. The location is dotted with a number of archaeological sites and historical places, admired with splendid architectures. Though most of the architectural splendors have been reduced to remnants, but still the city of Gour holds some aura, which attracts tourists from far and near. BOOKING DETAILS OF GOUR


Places to see in Gour: Tourist visiting Gour could witness some age-old architectural treasures, which enhance the historical value of the site. Gour is renowned for housing an ancient fort on the bank of the River Bhagirathi, where you can only view the ruins of the fort. However, the sight of the main entrance of the fort, the Dakhil Darwaza, admired with five-storied towers built in its four corners is truly amazing. It was built with red bricks, decorated with motifs of rosettes, suns, lamps etc. The southeastern corner of the fort is adorned with the Biasgazi wall, boasting a towering height of 22 yards. You will also admire the extensive Lukochuri Darwaza or the Royal Eastern Gate, built in Mughal style in the year 1655 by Shah Shuja. A domed squared building, known as Kadam Rasul, housing the footprint of The Prophet is also found within the fort area.

Pay a visit to the Tantipara Mosque, located near the fort. The mosque featuring five entrances is highly decorated with red colored bricks. Another site of tourist interest is Lattan, gracefully structured with colorful bands of green, blue, white and yellow glazed tiles. You will also be attracted to the beautifully built Firuz Minar, symbolizing the victory of Firuz Shah. The Bada Sona Masjid admired with 44 domes also offers a visual treat. You can spot the Madan Mohan Jiu Mandir in Ramkeli, located nearby the Bada Sona Masjid, frequented by the devotees of Sri Chaitanya.

Nearby attractions around Gour: You can highly organize a tour to the old city of Malda, located at the converging of two rivers. Visit the Mala town located 4 km. away from the Old Malda. The major attractions of the Old Malda city are the Nimasari Tower and The Jami Masjid. The region also features some marshy tracts called bhils, which attracts wild fowl like the Siberian goose.

Things to do in Gaur: Explore the city of Gaur admired with a number of significant historical places and archaeological sites. You can also enjoy a trail along the forest, encircling the entire region.

How to reach Gour: Gour is directly accessible from Malda by both roadway and railways. Moreover, direct flights are also available from Kolkata to Malda.

Best time to visit Gour: You can visit Gour any time of the year.