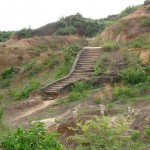 Though Mandal Pushkarini is not a highly famed weekend destination, but a visit to the place is truly rewarding. Mandal Pushkarini is located in Garbeta, West Medinipur. It is a huge pond located in a forest of Sal and Teak. While, staying at Mondal Pushkarini you can visit the nearby destinations of Garbeta like Sarbamangala temple, Raikota fort, Mangala Lake, Radhaballav temple, Gongoni gorge and Silaboti River. The famous terracotta temple town of Bishnupur is only 20 kms from here. Your stay at Mandal Pushkarini amidst nature will surely rejuvenate you senses. BOOK YOUR TRIP TO MANDAL PUSHKARINI


Places to see in Mandal Pushkarini: The region around the Mandal Pushkarini is covered with Sal plantation, the branches of which form a canopy. Stroll along the pathway under the shade of the canopy to explore the nearby attractions.

The major spots of tourist interests around Mondal Pushkarini are the temple of Sarbamangala and the famous fort of Raikota. The fort features four main gates, namely Rauta Darwaja, Lal Darwaja, Hanuman Darwaja and Pesa Darwaja. The fort is admired with seven ponds on the northern side – Pathuria, Jaltungi, Indra-Puskarini, Mangala, Hadua, Amra Puskarini and Kobesh Dighi. The ponds were dug by the Chauhan Kings of the Bagris. The Sarbamangala temple is the biggest temple located in the northern side of the Mangala Lake, which is a very impressive piece of architecture.

You can also find two other temples, namely the Radhaballav temple and the Kameshwar temple, the architectural style of which are similar to the Sarbamangala Temple. Radhaballav temple is a blend of Bengal and Orissa architecture. The temple houses the deity of Radha Krishna, built with black basalt stone. Tourists also flock around the Raghunathji temple or Raghunath Bari. This temple is located in the southern part of Silaboti River. This nine-pillared temple made by Raghunath or the Adi-Malla of Bishnupur is a prime attraction for the tourists. The Gongoni or Gangani gorge od Silabati River also attracts tourist and it is a very popular picnic spot.

You can also drive for 20 km. to reach Bishnupur to savor the breathtaking view of the terracotta temples at the site.

How to reach Mondal Pushkarini: Garbeta is located around 250 km. from Kolkata. The region is well connected by road and railway. You can locate Dhadika Bazar, around 5 km from Garbeta and to find Mondal Pushkarini, you need to travel for another 1.5 km. ahead on the NH 60 towards Raniganj.

BOOK YOUR TRIP TO MANDAL PUSHKARINI