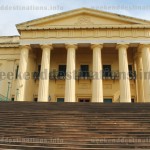 Murshidabad is one of the most prominent historical places of Bengal. It was the first capital of Bengal and is tied intricately to the history of Bengal since it was here that the infamous ‘Battle of Plassey’ took place, which changed the destiny of Bengal 200 years back. It served as an important platform for the rise of the Imperial British Power in 1857. Located along the banks of the beautiful River Bhagirati, Murshidabad was once a prosperous capital city of the famous Nawabs of Bengal who ruled this eastern region with great grandeur. Historically, it was a thriving city of culture and art that once prospered as the Golden Period of Bengal. Presently, it is one of the 18 districts of the State of West Bengal. BOOKING DETAILS OF MURSHIDABAD


Places to see in Murshidabad

Hazarduari – The Hazarduari Palace is the most magnificent structure of Murshidabad. The name of the palace signifies a palace with ‘1000 doors’. It is one of the chief tourist attractions of the region. The three-storey palace was built by architect Duncan McLeod in 1837 under the ruler ship of Nawab Najim Humaun Jah at a cost of INR 16.50 lacs. The palace is built typically in European styled architecture is 130 meters longs and 61 meters broad. The Hazarduari actually has 1000 doors of which only 900 are real. This was done mainly for safety purposes to evade the attacking enemy.

There are 114 palatial rooms and 8 splendidly spacious galleries in the Hazarduari. The palatial building has been built on 41 acres of land. Presently, the palace has been converted into a grand museum that features the historical past of Bengal. It is now under the care and maintenance of the Archeological Survey of India. 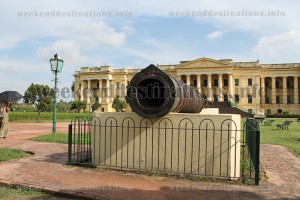 The majestic museum of the palace has some of the rarest and exquisite collection of armory ranging from metal swords of all shapes and sizes to guns dating back to the colonial period, manuscripts, maps, beautiful paintings and portraits of the Nawab dynasty, ivory and wood artistry, European sculptures and many other works of art. The armory has around 2700 arms in total of which only selected few have been kept for public display. Another majestic exhibit is the Classic vintage and Fittan cars that were used by the Nawabs and their erstwhile families. There is also a library within the palace that has some of the rarest collection of personal books of the Nawab family. The palace also has a beautiful garden built in the magnificent Victorian style that has a clock-tower situated on its ground. The Darbar Hall with its lofty dome (24 meters high) adorned with fine stucco ornamentation, is the most attractive feature of this monument. 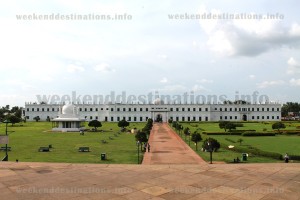 The Imambara – The Nizamat Imambara is the largest imambara (congregation hall) in Bengal. It was built in 1847 by the Nawab Nazim Mansoor Ali Khan Feradun Jah. Its main entrance is parallel to the northern flank of the Hazarduari Palace. Surprisingly, this magnificent Imambara was built only in 7 months. It stands at an overwhelming height of 680 feet very close to the banks of the Bhagirathi River and has its own ghat which is called the Mint Ghat. This rectangular building is divided into 3 equal blocks, each with a large quadrangle. The center quadrangle contains the single-domed Medina on a square platform and surrounded on all sides by Prayer Halls and an upper balcony covered with the ornamental stained glasses in front. In 1847 around Rupees 6 lakhs was required to built this monumental construction.

Madina Mosque – This beautiful mosque was built by Nawab Siraj-ud-Daula. It is most revered among the Muslim community because the foundation of the mosque was built with a portion of the Holy soil of Mecca. The mosque is beautifully ornamented and embellished with China tiles and the arches and walls of the mosque are adorned with engravings from the Holy Quran. Annual festivals of Muharram and Id-ul-fiter are celebrated here with great grandeur. 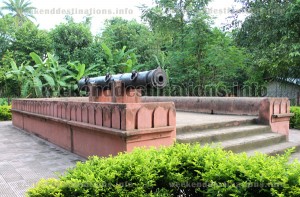 Jahankosha Canon – This humungus cannon was built in the 17th century by a renowned craftsman of Dhaka named Janardan Karmakar. The cannon weigh about 7 tons and is 17 feet 6 inches in length and 3 feet in width. The cannon is made of a composition of 8 different metals which are gold, silver, copper, lead, zinc, mercury, iron and tin that have been specifically used in measured quantity to make it rust-free from the ravages of time. It is astoundingly more than 370 years old. According to an inscription engraved on the gun, it was made at the instance of Subadar Islam Khan during the reign of Shah Jahan in 1637 AD.

Wasef Manzil – This beautiful palace was built by the last ruling Nawab of Murshidabad, “Nawab Wasif Ali Mirza”. This palace is situated close to the Hazarduari palace. The staircases and gorgeous marble statues of the palace are noteworthy. It has now been converted into a museum.

Moti Jheel – Moti jheel is a scenic horse-shoe shaped lake located south of Lalbagh which was excavated by Nawazesh Mohammad. The area surrounding Motijheel was once the official residence of Warren Hastings when he became the Political President at the Durbar of the Nawab Nazim (1771 – 73 AD). It was also known as the ‘Company Bagh’ during the colonial era. 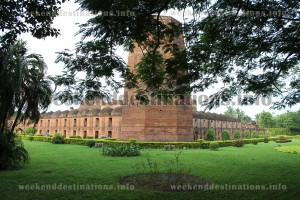 Katra Masjid – This mosque was built by architect Murad Farash for Nawab Murshid Quli Khan in 1723 AD. Standing on 24 meters high square plinth, this brick-built mosque is surrounded by a row of double storied domed cells, which form a cloister to the spacious courtyard in its front. Four huge minars were built a 4 corners of the quadrangle, of which, one in the north-west and the other in south-west are now surviving. The mosque is approachable by a flight of 14 steps from the east. Murshid Quli Khan’s mortal remains lie buried below the steps of the Mosque. It is said the Murshid Quli Khan ordered this out of humility, so as to be trodden on by all who passed through. The total area of the mosque is 19.5 acres. Around 2000 people can offer Namaz at the same time in the Katra Masjid compound.

Things to do in Murshidabad

Murshidabad is famous for its rich artistic and cultural heritage. You must not definitely miss the following art works of the region for which it is famed all over the country.

Ivory and Wood Crafting Industry – This industry dates back to the regal periods of the Nawabs of Bengal. The industry mainly thrived on the prosperity of the Nawabs and his noblemen. With time and disintegration of the dynasties, the crafting culture also vanished. However, there are many remnants of the olden periods left as pieces of souvenir relics that reminds one of the golden period of this craft that once prospered in this region. The carvings mostly consisted of animal figurines, architectural miniatures and other forms of art works.

Sholapith – Shola is basically a milky-white sponge-wood that is used to carve various forms of beautiful objects and figurines of art. Shola is derived from the shoal plant, which mainly grows in marshland areas. Murshidabad is famous for its Shola art works. The shola artisans make a variety of artistry ranging from figurines of Gods and Goddesses, ornate head-wears of bridal couple, floral designs, peacock-boats and a variety of interesting and beautiful artistic objects.


Silk – Murshidabad is very famous for its Baluchori sarees, which are indigenously produced in the nearby town of Baluchar. The sarees are basically made from silk with exquisite silk brocade design ranging in a multitude of colors and patterns. The most popular colors are red, green, blue and yellow. An interesting feature of the saree artwork is that every saree depicts a historical event of the place like a court scene, horse riders, temple architectures, etc.

Metals – Murshidabad and surrounding areas like Khagra, Berhampore, Kandi, Baranagar and Jangipur is also famous for bell-metal and brass utensils work. Most of these metal works are of exquisite quality and even exported outside the country.

Finally, the most important flavor of this region is its exquisite sweets and delightfully savory mangoes that are simply astounding to the taste buds. Some famous sweets are Chanabada, Monhara and Sponge Rasogollas. While some of the delectable mango species of this region are Rani, Champa, Langra, Anaras, Panja, Bhabani, Sarbati, Bimli and Sadaulla.

Nearby attractions around Murshidabad

Berhampur – The nearby town of Berhampur may not be as historically lustrous as Murshidabad, but nevertheless it also has some traces of history imprinted upon its grounds. Some interesting places of visit around Berhampur includes the Dutch graveyard, Sripu Palace (built by Krishnakanta Nandi), British Graveyard, Kapileswar Temple (a beautifully built terracotta structure dedicated to Goddesses Durga, Kali, Lakshmi and Saraswati), and the Babulbona graveyard. The Berhampur Court, Jail and Circuit Houses are other interesting architectural structures from the colonial period.

Cossimbazar – The place is most renowned for the Cossimbazar Palace, which was built by Ayodhyam Roy and his son Dinabandhu Roy. The palace has 100 pillars embedded with a lotus finial in it and surrounded by gorgeous terracotta walls. Cossimbazar is also famous for being the place where the first friction developed between Nawab Siraj-ud-Daula and the British.

Baranagore – Famous for its 18th century terracotta temple built by Rani Bhabani of Natore. Baranagore is also known as the Benaras of Bengal due to the presence of a multitude of temples here. Some prominent ones are the Jorbangla temple, Charbagla temple, Bhabanishwar temple, etc.

Saibad – Situated between Murshidabad and Berhampur, it is famous for a 16th century Armenian Church. The church complex has a tank and a graveyard attached to its periphery. Every Sunday morning prayer services are held here at the church.

Azimganj & Jiaganj – These two townships are important places where Jain culture flourished mainly from the 11th century to the 18th century. Both the towns are dotted by numerous Jain temples of which the popular ones are Sree Chintamoni Parswanath Bhagwan, Shree Sambhavnath Bhagwa and Sree Adinath Bhagwan. These temples are excellent examples of ancient Bengal terracotta art.

Kandi – Located 30 kms South-West of Berhampore, the place is famous for the Kandi Palace, which houses the divine palatial temple of Radha Ballabha.

Sagardighi – Located about 30 km North-West of Berhampore, Sagardighi has many antic remains of the Pala Dynasty of Bengal. The place also has important architectural structures like the Kherur Mosque, ruins of the palace of Hossain Shah and the Chandanbati temple. 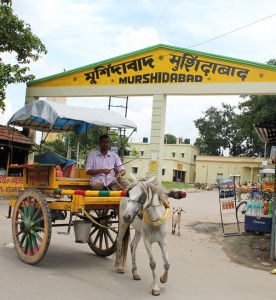 How to Reach Murshidabad

Berahampur railway station is the nearest Junction railway station near Murshidabad. The N.S.C. Bose International Airport is the nearest airport at Kolkata from where Murshidabad is 195 kilometers by road. Regular bus services are available from various district towns of Kolkata like Burdwan, Rampurhat, Suri, Bolpur, Malda, Krishnagar and Durgapur. Some popular trains that travel to Murshidabad are the Hazarduari Express, Dhanadhanye Express, Lalgola Express and Bhagirathi Express.

The climate of Murshidabad is typically tropical with hot and humid weather and heavy monsoons. Murshidabad is good to be visited throughout the year; however, the winters are very pleasant here and are the best time for sightseeing and exploration activities.

Lodging and dining facilities at Murshidabad 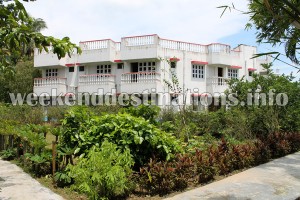 Resort at Murshidabad: Our affiliate resort at Murshidabad is just beside the Bhagirati River with a garden full of exotic trees and plants from the ages of Nawabs. There are AC and non AC rooms with attached western bathrooms. If you want to stay in a comfortable resort adjacent to Hazarduari, then this resort should be your choice. 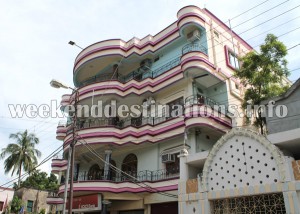 The hotel has AC and non AC rooms equipped with modern amenities and attached western bathroom, comfortable beds, televisions, lift and more amenities. With conference hall and river viewing rooms, the hotel is a good accommodation at Murshidabad. The hotel also arranges pickup and drop from Murshidabad railway station.