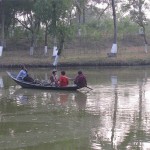 If you want to experience the tranquility of nature along with a touch of the Sunderban, then you can make a trip to the Piyali Island. You can drive to the Piyali Island after crossing a small bridge over River Piyali. The two rivers Matla and Piyali surround this island.  The Piyali River actually flows through the Island and mixes with Matla River at a later stage. There is only one tourist lodge in this island but it has well-supported infrastructure for tourists. There are ample things to do in Piyali Island – you can take a nature walk, enjoy a boat ride, do some bird watching, enjoy in the gardens and savor the village life. BOOK YOUR TRIP TO PIYALI ISLAND


Places to see in Piyali Island: The Island itself is the main attraction with its paddy fields, meandering Piyali River, sparse jungles, Matla River, the mangrove forest on the banks of the island and village life. Some migratory birds also flock to the coats of Piyali Island during winters.

Nearby attractions in Piyali Island: Those who want to explore nearby destinations can easily organize an enjoyable trip to Jhorkhali and Kaikhali from Piyali Island.

Things to do in Piyali Island: There is only one privately run tourist lodge in Piyali Island, which has nice arrangements for overnight staying. You can enjoy in the gardens, take a wilderness walk, enjoy a boat ride and do some bird watching. The village life surrounding Piyali Island can also be relished. Moreover, Piyali Island is also famous for organizing educational tours.

How to reach Piyali Island: Piyali is located at a distance of 75 km from Kolkata. While traveling by car, cross the Baruipur Railway gate and take the right hand road leading to Gochoron crossing. From there, drive to the Barasat crossing. Turn left to reach the Mohishmari crossing. If you are traveling by train, get down at the south Barasat station. Shared trekkers are available on the spot that will take you to Piyali Island.

Best time to visit Piyali Island: You can arrange for a tour to Piyali Island any time of the year but the winters would be a nice time to watch the birds.

BOOK YOUR TRIP TO PIYALI ISLAND