Throughout the early part of the last century, Madhupur has been considered a health resort by the elites of Bengal due to its soothing climate and magic mineral – rich water, which is said to have curative properties. Madhupur is a typical hilly region with jungles, rivers and tribal villages and has been very popular in the last two centuries as a health resort for “Hawa Bodol“. However, with much of its glory lost to time, Madhupur still takes you to a journey through time when you jump into a Tonga and pass by the ruins of the century-old houses and churches or visit the local Haat on a Friday to pick-up tribal hand beaten “Kadai” work. You can enjoy all these while you stay at Madhupur Guest House.

Our heritage bungalow in Madhupur, boasts of 07 well-appointed rooms decked with period furniture from the 1920s and facilitated with modern amenities like attached western bathrooms with geysers, poster beds and power back-up. Built more than 150 years ago by the earliest settlers of Madhupur, our Madhupur Guest House is one of the finest examples of the typical Bengal’s Zamindar Garden House architecture featuring arched doorways, porticos, Khirki Windows, Kari Barga Ceilings, large wooden doors and red floors. All the 07 rooms have been decked with period furniture and exude the charm of staying in a typical Bengali Zamindar Garden House or Baganbari. This Bungalow accommodates its guests in AC Family Suites, AC Double bedded rooms, Non AC Double as well as Four Bedded rooms. Food is essentially traditional Bengali cuisine and most of the produces are organic and locally procured.

Things to do in Madhupur

Bird watching in the surrounding forests and grasslands have recently become a popular activity of the guests. You can take a walk along the dusty lanes of Madhupur discovering the bungalows, churches and other Colonial era structures all the way. A walk along the tribal villages or an early morning hike to a local hill top would reward you with panoramic views of faraway hills and lush forests. If you are interested in local culture, then we can arrange for tribal dance performances in the evenings too. While in Madhupur, you can enjoy a day picnic on the banks of Pathrol River. You can also visit the local Haat on Fridays to pick up some Santhal handicrafts, garments, paintings and other handmade ethnic things which are brought by the artisans from surrounding villages. Also, Madhupur is famous for its “Loha Shankha Pala,” which are Bangles used in Bengalee weddings.

How to reach Madhupur Guest House

This little township has a sparkling weather with warm days and cool evenings. This is one of the main reasons why the erstwhile elites of Bengal visited Madhupur for a “Change”. The daytime during summers is quite hot and dry but the evenings are cool. Winter and rainy season are the best times to visit McCluskieganj.

Places to see in Madhupur

While staying in Madhupur Guest Office, you can take a walk on the sand banks of Pathrol River. The historic St. Columbus Church is just 3.5 kms. away from the bungalow. The scenic Bakulia Falls is around 7 kms. from the bungalow. The Kapil Math (4.0 kms away) with its extensive gardens and space was established in 1927-28 by Samkhya-Yogacharya Swami Hariharananda Aranya who spent the last few years of his life here. You can pay respect to his Samadhi here. The Pathrol Kali Mandir, which is considered one of the holiest places of worship in Madhupur is just 09 kms from the Madhupur Guest House. 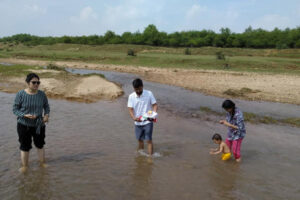 The usual itineraries for day trips would comprise a visit to the hill town of Giridih around 50 kms away. On the way to Giridih, you can drop at the famous Khandoli Dam and the Tourism Park built on the lake to enjoy boating and watersports. A drive of another 22 kms. would take you to Usri Falls. From Giridih Bus Stand, if you take the road towards Madhuban, you would reach the foot of the Parswanath Hills in another 27 kms. Parswanath Hill is one of the holiest pilgrimages of the Jains in India.

Madhupur is 32 kms. from the main town Deoghar. A day trip from Madhupur to Deoghar with local sightseeing at Burai Pahar, Nandan Pahar, Naulakha Mandir, Trikut Pahar, Tapovan caves, Satsang Ashram, Baidyanath Dham, Mayurakshi River is in most tourist’s itinerary. The first sightseeing on the way would be at Burai Pahar, which is a colossal monolithic rock with naturally formed caves. Located beside a waterbody, this Geological wonder is a feast to the eyes. The Naulakha Mandir got its name because it was built at an expenditure of 9 lakh rupees in 1863 by Charushila Devi of Kolkata’s Pathuriaghata Rajbari. The ropeway ride to the top of Trikut Pahar is another prime attraction. The panoramic view of surrounding hills, forests and distant villages from the Trikuteswar Mahadev Temple located at hilltop is mesmerising. The beautiful Tapovan Caves was once the seat for meditation of the recluse Balananda Brahmachari Maharaj. It is said that the Great Sage Valmiki had come here and meditated too. It is also believed that Sita Devi too had bathed in the water of the Shivakund. An imposing 350 feet high statue of Shiva on the hilltop is an attractive call for the tourists too. Another popular attraction in Deoghar is the Nandan Pahar, which is a hillock with an amusement park.

Deoghar is also known as Baidyanath Dham as it is the seat for one of the 12 Jyotirlingas associated with Shiva. A 72-feet high temple of Mahadev’s “Kamana Linga” built by King Punarmal in 1596 is one of the holiest sites for Hindus of the world. It is also one of the 51 Sati Pithas where it is believed that the heart of Sati had fallen. The Satsang Nagar established on 27 January 1969, is the Ashram of Thakur Anukul Chandra where thousands of devotees visit the internationally famed Ashram in Deoghar everyday to pay their respects. Deoghar is located on the banks of Mayurakshi River or Mor Nadi, so guests can spend a few idle moments on the banks of this beautiful river whose water is as clear as the Peacock’s eyes. This 25 km – long river has it’s source on the Udgam Sthal of the ancient Trikut Hills. 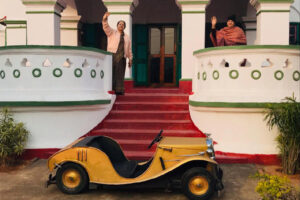